EU and US say they don’t aim at ‘TTIP-light’

US and European Union trade officials said yesterday (28 April) they would not settle for a limited trans-Atlantic free trade deal that ignores deep divisions on agricultural products, services, public procurement and dispute resolution.

Many European beef producers could be sunk by increased American imports.
[Garry Knight/Flickr] 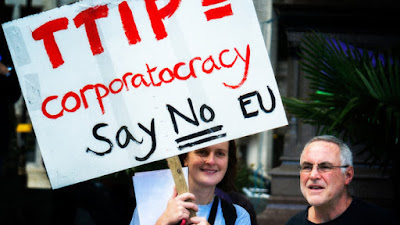 In separate briefings during the latest negotiating round in New York, the US and EU officials said they would push for a comprehensive Trans-Atlantic Trade and Investment Partnership, or TTIP, before US President Barack Obama leaves office in January.

“We are not going to shoot for or accept a ‘TTIP light,’ a US Trade Representative official said on condition of anonymity because of the sensitivity of the talks.

“It has to be comprehensive, it has to be ambitious and we do think we have the time that we need this year to complete such an ambitious deal,” the official added.

But the US officials and their European counterparts said bridging gaps would take a lot of work and that progress this week had centered mainly on non-controversial technical language. They are trying to lay the groundwork to have all but the thorniest problems solved by the autumn.