Chancellor Angela Merkel on Saturday (25 November) welcomed the prospect of talks on a “grand coalition” with her Social Democrat (SPD) rivals and defended the record of the previous such government, saying it had worked well. 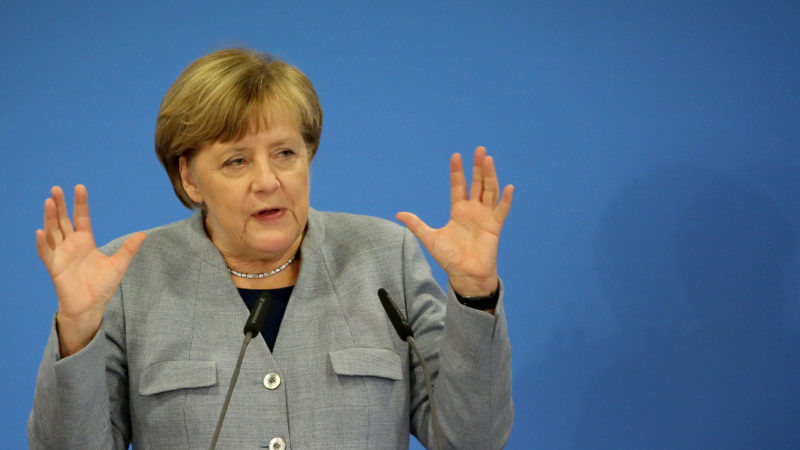 Merkel’s fourth term was cast into doubt when the pro-business Free Democrats (FDP) walked out of three-way coalition talks with her conservative bloc and the Greens last Sunday, causing a political impasse in Europe’s biggest economy.
_______________________

German Chancellor Angela Merkel’s efforts to form a three-way coalition government that would secure her a fourth term hit a major setback on Sunday after a would-be coalition partner pulled out of exploratory talks, citing irreconcilable differences.
_______________________

But on Friday, the SPD reversed a previous decision and agreed to talk to Merkel, raising the possibilities of a new “grand coalition” which has ruled Germany for the last four years, or of a minority government.
_______________________

Germany moved a step towards resolving its political crisis on Friday (24 November) when the Social Democrats (SPD) said they were ready to hold talks with caretaker Chancellor Angela Merkel, in a sign they might offer the veteran leader their key support.
_______________________

Addressing party members on Saturday, Merkel argued voters had given her conservatives a mandate to rule in the 24 September election which handed her party the most parliamentary seats but limited coalition options. Her conservatives bled support to the far-right Alternative for Germany (AfD).

“Europe needs a strong Germany, it is desirable to get a government in place quickly,” Merkel told a regional party meeting in northern Germany, adding, however, that her acting government could carry on day to day business.
(...)
Publicado por: Jorge Frota às 09:42