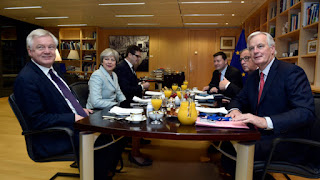 The EU’s chief Brexit negotiator has warned the UK government that trade barriers with the EU would be “unavoidable” if it insists on leaving the customs union, as both sides refused to concede any new ground.
“Without the customs union, outside the single market, barriers to trade and goods and services are unavoidable,” Michel Barnier said on Monday (5 February) following meetings with his counterpart David Davis and Prime Minister Theresa May in London. This includes financial services and the “passport” currently allowing UK banks to trade seamlessly with the continent, which Barnier said will be “gone” after Brexit. (...)
Publicado por: José Carlos Fernandes Pereira às 12:25